What is a Concussion?

What are the Symptoms?

What Should You Do If You Suspect A Concussion? 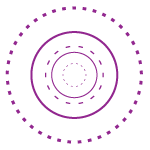 Traumatic Brain Injury (TBI)-related damage can be confined to one area of the brain, known as a focal injury, or it can occur over a more widespread area, known as a diffuse injury. The type of injury is another determinant of the effect on the brain. Some injuries are considered primary, meaning the damage is immediate. Other consequences of TBI can be secondary, meaning they can occur gradually over the course of hours, days, or weeks. These secondary brain injuries are the result of reactive processes that occur after the initial head trauma.

There are a variety of immediate effects on the brain, including various types of bleeding and tearing forces that injure nerve fibers and cause inflammation, metabolic changes, and brain swelling.

DAI is one of the most common types of brain injuries. DAI refers to widespread damage to the brain’s white matter. White matter is composed of bundles of axons (projections of nerve cells that carry electrical impulses). Like the wires in a computer, axons connect various areas of the brain to one another. DAI is the result of shearing forces, which stretch or tear these axon bundles. This damage commonly occurs in auto accidents, falls, or sports injuries. It usually results from rotational forces (twisting) or sudden deceleration. It can result in a disruption of neural circuits and a breakdown of overall communication among nerve cells, or neurons, in the brain. It also leads to the release of brain chemicals that can cause further damage. These injuries can cause temporary or permanent damage to the brain, and recovery can be prolonged.

A type of mild TBI that may be considered a temporary injury to the brain but could take minutes to several months to heal. Concussion can be caused by a number of things including a bump, blow, or jolt to the head, sports injury or fall, motor vehicle accident, weapons blast, or a rapid acceleration or deceleration of the brain within the skull (such as the person having been violently shaken).

The individual either suddenly loses consciousness or has sudden altered state of consciousness or awareness, and is often called “dazed” or said to have his/her “bell rung.” A second concussion closely following the first one causes further damage to the brain — the so-called “second hit” phenomenon — and can lead to permanent damage or even death  in some instances.

Hematomas are a pooling of blood in the tissues outside of the blood vessels. They can develop when major blood vessels in the head become damaged, causing severe bleeding in and around the brain. Different types of hematomas form depending on where the blood collects relative to the meninges. The meninges are the protective membranes surrounding the brain, which consist of three layers: dura mater (outermost), arachnoid mater (middle), and pia mater (innermost).

Contusions are a bruising or swelling of the brain that occurs when very small blood vessels bleed into brain tissue. Contusions can occur directly under the impact site (i.e, a coup injury) or, more often, on the complete opposite side of the brain from the impact (i.e., a contrecoup injury). They can appear after a delay of hours to a day.

Contusions or subdural hematomas that occur at the site of head impact as well as directly opposite the coup lesion. Generally they occur when the head abruptly decelerates, which causes the brain to bounce back and forth within the skull (such as in a high-speed car crash). This type of injury also occurs in shaken baby syndrome, a severe head injury that results when an infant or toddler is shaken forcibly enough to cause the brain to bounce back and forth against the skull.

CTE results from blows to the head over a period of time that cause concussion (mild traumatic brain injury). These injuries lead to difficulties with thinking (cognition), emotions and behaviors that do not become noticeable until many years later.

CTE can lead to physical problems as well. Not everyone who has one or more concussions develops CTE. CTE involves progressive damage to nerve cells (neurodegenerative disease). The damage results in visible changes to the brain. Some of these changes can be seen with brain imaging, but a diagnosis at this time can be made only on inspection after death (autopsy). Researchers are working to find a way to diagnose CTE in those who have the disease while the individuals are still alive. Originally called punch drunk syndrome (dementia pugilistica), CTE was first demonstrated in boxers. Doctors now know that other individuals who play a wide variety of sports that involve repeated blows to the head, such as football players, can develop CTE. Military personnel who have had blast injuries also are at risk. Military personnel who have experienced traumatic brain injury may experience post-traumatic stress disorder.

Signs and Symptoms of CTE usually begin 8 to 10 years after either repetitive mild traumatic brain injuries or a specific brain injury incident occurs. These include:

Over time, memory and executive function may become worse, and other signs and symptoms may develop, including:

Researchers use the following stages to describe the progression of CTE symptoms:

CTE causes ongoing pathological changes that once are started, continue to have an effect for years or decades after the original traumatic brain injury or after an individual retires from a sport. Symptoms progress throughout an individual’s life.

Effect of CTE on the Brain and the Neurological System

CTE causes the wasting away (atrophy) of many parts of the brain. Injuries to the section of nerve cells involved in conducting electrical impulses (axons) interfere with cell-to-cell communication. Other changes include deposits of the proteins tau and TDP-43, and changes in white matter — the part of the brain made up of nerve fibers. Unlike in Alzheimer’s disease, deposits of beta-amyloid, another protein, are not common. More than one-third of people with CTE also have signs of another neurodegenerative disease, including Alzheimer’s disease, motor neuron disease, Parkinson’s disease or frontotemporal lobar degeneration.

When to Seek Help

We work with the very best to deliver you a tailored, whole-body training program. We are proud to be a part of your team when you need us.